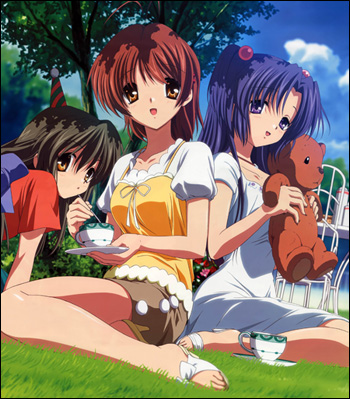 Maybe I should elaborate more on that last post…

I have nothing against Clannad. It’s a good show! It has nice animation, good acting, decent direction and the writing isn’t totally horrible! And yes, considering the ending we got, I too felt a bit shortchanged! I do want to see the rest of the story, if only just to make sense of those few unexplained images in the opening, but– and this is a rather large but– can we please have Haruhi 2 first? I’m not even that much of a Haruhi-ist, but after Kanon and Clannad (I suppose KyoAni did take 6 months off for that Lucky Star thing…) I want some crazy SF adventures again!

I’ve noticed that Key shows are good for me in small doses. I love Air, even if it doesn’t make any sense at all; think Kanon is good solid entertainment; and even find Clannad to be an ok use of 23 minutes each week but… seriously. After a while one just grows tired of Key’s brand of writing and just wants something more off-beat and less vanilla. Sure, by Clannad Key’s writing is in its most matured state, but as a result it’s actually a little boring. Thusly, I’m growing rather pissed that KyoAni is wasting their talents on this sub-par story. That second half best be damn good stuff to make up for shit like Kyou’s EXISTENCE.

Conversely, I’ve heard reports from Haruhi novel nerds that the books skew in favour of Yuki, especially book 4 (the one suspected to be animated next.) I don’t like Yuki (but that’s another post entirely) so naturally I’m also approaching the rest of Haruhi with some degree caution, too. Instead of boring old Yuki, let’s focus on the adventures of Mikuru, guys! She’s clearly the best character! Give the girl some love!

Seriously, what the fuck is wrong with Japan. /me grumbles and watches Kodomo no Jikan DVD rips