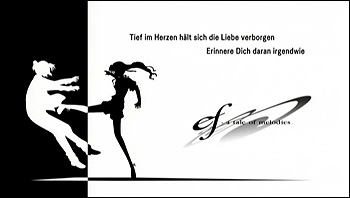 The other show I finished yesterday was ef – a tale of melodies. Ugh.

ef – a tale of memories, the series that precedes melodies, was all around okay, and ended rather strongly. I was primarily interested in it because it was the first eroge adaptation Shaft had done after the most dangerous Akiyuki Shinbo joined forces with them, and started mixing shit up. Sure, they had done things like Popotan, but post-Shinbo Shaft is all about Art with a capital A, and I wanted to see this studio’s take on the tried and true genre that is “visual novel adaptation.”

Sadly, Shinbo wasn’t the director of memories–some guy called Shin Oonuma was. He did pretty decently with memories, but the show had way too many outer glows and cloud filters for my tastes. I figured by melodies he would have improved, but… no.

The main thing that kills melodies however is not its directorial strangeness, but its terrible writing. The writing in memories wasn’t stellar, and quite frankly it bored me half of the time, but it wasn’t all that bad. All of melodies is relentlessly boring. The plotlines are also incredibly lazy–they expect you to feel for these characters for no reason at all, then meander for a bit, and finally come to an asinine end. It doesn’t help that Oonuma and crew try to distract you from the lazy writing by chopping everything up and mixing it together, forcing you to piece together these clichéd narratives on your own.

When the show wasn’t killing me with its poor writing, Oonuma’s overuse of strange and inconsistent imagery made the show really difficult to watch. Now, as any long time reader of this blog will know, I love strange imagery in my anime. I’m a big fan of Hideaki Anno’s work on Eva, and I love everything Akiyuki Shinbo directs. However, whenever those directors get weird, the weirdness is unified, focused, and never overstays its welcome. Oonuma’s crew saw it fit to use every single cool visual style they could think of, which lead to a production that looked not dissimilar to a kid’s first time in Photoshop. I did appreciate the wide variety of animation styles and visuals on display, but they never meshed and the entire thing came off as amateur.

All that said, there was one part that I liked about this show, and it was Kuze’s struggle. Most people got sick of him, but I found his inner battles to be quite compelling. It’s too bad it was all brought down by Oonuma’s shotgun approach to “artistic” directing. Oh well.