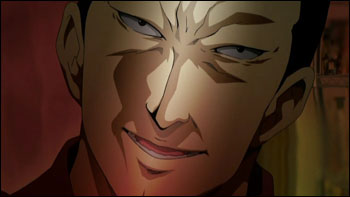 Um, wow. Seems like they finally found the right people to adapt Genshiken into animation. NOT ONLY is the animation worlds better than that seen in the first series or the OVA, the production staff actually seem to get the subject-matter that they are dealing with. The show is peppered with small nods to various classic anime (thus far mostly Gundam) and the biggest of these nods is the opening itself. This season’s opening parodies newer Gundam openings, and features Madarame and Sasahara as Char and Amuro respectively. To make the deal even sweeter, super-otaku and ero illustrator Urushihara Satoshi himself, directs the opening complete with bouncy boob animation. His direction burns with the true spirit of the otaku– challenging the impossible and pushing forward into the future towards infinity (ok that’s not like otaku at all, but it sounds cool). This is Otaku-dom at its core. This 90 seconds, right here.

Moving on from the opening, the actual content isn’t that different from the manga, which is fine. Being faithful is better than making stupid shit up (unless you happen to be SHAFT.) One thing to note is that previous animated works brushed over a couple of fine details, those being Sasahara’s acquisition of a PC and Ohno and Tanaka being together as a couple. Sasahara’s thing is taken care of, because now he has a laptop (at the expense of not getting an animated version of that one hilarious manga chapter) and Ohno’s and Tanaka’s relationship is still hinted at subtly, as it was in the OVA and at the end of the first TV series. Another thing to note is that Studio Arms seems to be primarily a porn studio. This means the fanservice is like super good.

This show is delightful. It hits me all my weak spots, leaving me as nothing more than a pile of goo. The design work is exactly to my liking, as it dances on the line between cartoony and realistic perfectly. The characters, while archetypal, are all realized well and play off each other in an amusing fashion. The gags aren’t laugh out loud funny, but they’re good for a light chuckle. The entertainment value found in this show isn’t really in the laughs-per-minute, but rather comes from one enjoying watching the characters just be who they are. It’s good fun done well, and I’m sure anyone who likes being happy can appreciate it.

ef -a tale of memories

SHAFT and Shinbo tackle an eroge adaptation, and the results are rather interesting. It’s important to note that Shinbo isn’t directing here, he’s only supervising, but his eccentric and surreal visuals are still there to some degree. However, the surrealism doesn’t really work that well. Its application seems a bit haphazard, and it’s not as skillfully woven in as it is a full on Shinbo work. Episode two is a little better in this respect, and also throws in some traditional Shinbo imagery and techniques.  As far as the proper content goes, I’m not that taken with either of the stories they’re telling here, or the characters. I like one story a little better than the other, but other than that, I’m only watching for the visuals. Hopefully the actually meat of the show will improve.